During my extensive travels throughout the cyber-asylum known as Facebook, I have noticed that some members have affixed the word “Author” to their profile names, as in “Author John Doe” or “John Doe Author.” When I first observed this phenomenon, I thought that a great many people were named Arthur and that each of them had misspelled it. 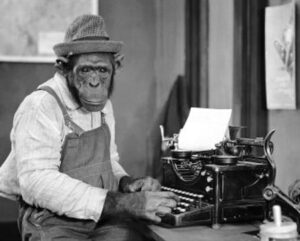 Sometimes, the word appears in parenthesis; sometimes the word is “Writer.” Same difference. When the word follows the person’s name, there is seldom a comma, which calls into question the so-called author’s grasp of punctuation

But never mind that.

Granted, I have not explored all the nooks and crannies of this cyber-wasteland, nor do I have any desire to, but it seems that “Author” is the only term applied in this manner for I have yet to come across anyone called “Appliance Repairman John Doe” or “Jane Doe Neurologist” or “Bob Smith Ramada Inn Concierge” or “President of General Motors Joe Schmo.”

Frankly, if I wished to add a profession to my name, I would not choose “Author,” as this vocation is a lonely practice characterized by many years of toil, endless rewriting, general anonymity, frustratingly inattentive agents, awful reviews, a tragic paucity of groupies save perhaps for the random starry-eyed librarian, and that it seldom produces more than a poverty-level livelihood.

On the bright side, it is a passable form of self-expression when accomplished with style and eloquence and, more importantly, requires only a laptop computer and a cursory knowledge of basic spelling and sentence structure which most people with an ounce of wit can recall from their school days and thus easily reproduce on a grocery list. Or 250 pages filled with words and called “A Novel.” I have noted that many of these so-called novels are published by a company known as “Createspace,” which must be quite profitable as this name appears with amazing frequency.

Is there perchance some glamour or status in being an author that I am not aware of? Is it the librarians?

But “Author”? Surely you jest. Everybody’s a goddamn Author.